In lieu of a video tonight, I’d like to take a moment and review one of the music industry’s favorite ways to make an extra dime on previously released material — also known as “remastered” and/or “reissued” albums.  And, just because it feels right, I’d like to incorporate some thoughts on the release of previously unreleased material, or “bootleg,” “b-side,” and/or “rarity” collections.

What is a remastered recording, really?  Now, in some cases, a remastered recording can be the most exciting release in an artist’s catalog, particularly for longtime fans and audiophiles.  For instance, there really is no substitute for the fully stereo-version of the Beach Boys Pet Sounds.  This remastered disc created quite a controversy when it first came out, as you had purists who claimed it should remain mono, as it was originally intended and released by Brian Wilson and the boys.  Others embraced the all-new expansion of the sound on this classic album.  As for me, I cannot understand how anyone in possession of the Pet Sounds CD could refrain from skipping to track 14 every time to begin with the stereo recording of “Wouldn’t It Be Nice.”  Compared to the mono recordings, the second set of stereo-mixed tracks are crisp and clear as they pop out around your ears.  You can hear each instrument and truly appreciate the minute instrumental and harmonic details that are present in this Beach Boys masterpiece, as compared to the mono versions which have a tendency to crackle and feel claustrophobic when turned up to any reasonable volume.

This, unfortunately, is probably the exception in the world of “remasters.”

Beware music fans when you pick up a CD or read online that a disc has been “remastered.”  The trick here is to read into the fine print and ascertain to what degree the recording has actually been altered.  For instance, the classic packaging/marketing trick has been for a sticker on a CD case to read “Digitally Remastered.”  That sounds great!  I have to have this new and improved recording for my collection!…

Well, perhaps so, but half the time all this means is that someone converted the analog tracks into a digital format.  Depending on the artist, producer, remixer, and age of original recording, there has often been no real improvement to the sound of the recording.  I’ve certainly been burned a few times by this “Digitally Remastered” marketing…

That being said, there really are some truly great remastered recordings out there if you’re careful to ascertain the degree of thought and effort that has gone into the apparent “remastering” (Like the re-issue of the main albums in Bob Dylan’s catalog a few years ago — and you better appreciate the improvement in sound quality, because there’s no booklet or bonus tracks to speak of!)

Not to sound bitter here or anything, but reissues can also be just another waste of money.  Or they can offer any amazing addition to your collection.  How can you tell the difference?  Well, here are a few tips:

Bootlegs (and B-sides and Rarities)

A final category in this collection of corporate cash cows (and music lovers’ delights!) are officially released bootleg recordings.  For convenience, I’ll lump in B-sides and rarities.  Bootlegs, of course, are tracks that have not been officially released but are circulated underground among fans.  Perhaps the most famous release of a bootleg was Bob Dylan and the Band’s Basement Tapes.  Worth every crazy, weird minute of sound, my friends!  Dylan’s celebrated Bootleg Series is dedicated to releasing unheard tracks and live concerts that have been — almost without exception — wonderful and worthwhile purchases.  Again, I would ask that you apply that aforementioned question to the purchase laid out before you:  “How much do you like this band/artist?”

Most bands, at some point or another, release a collection of unreleased tracks, b-sides, and rarities.  These are sometimes mediocre at best (Hootie and the Blowfish’s Scattered, Covered, and Smothered) with a minimum of only somewhat interesting liner notes.  However, these are sometimes wildly fascinating and rewarding, such as the Beach Boys’ Endless Harmony soundtrack, Warren Zevon’s Preludes, or Pearl Jam’s Lost Dogs (the latter incorporating a detailed and interesting read of a booklet).

The trick here, to be repeated once and only once more, is to evaluate how much you like the artist or band, and then to take a calculated risk.  In this writer’s opinion, half the fun of surfing the racks (or the web) and buying new albums — whether they be standard releases, remasters, reissues, or bootlegs — is the risk involved.  You may be — and perhaps most often will be — unimpressed or only somewhat entertained.  But it’s all worth it when you have those moments of revelation as you discover a truly worthwhile addition to your music library!

The FMP Music Store is back online after a long hiatus.  We’re definitely still in testing mode, so if you notice something, please contact us.

But, we do know that the store is working again and both physical CDs and downloads are available for purchase right now!

They said it wouldn’t happen. There’s no way the album would ever be released. It was even written about in the newspapers. But, these words of discouragement are what seem to drive Masters of the Universe.

“Homestead’s Revenge” combines the songwriting skills of all five members along with expert harmonies and instrumentation. The album is nothing less than a polished work of art. 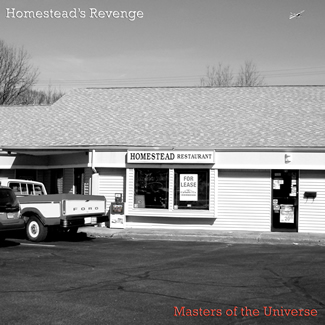 The album is available in two forms: Digital download and physical CD, both for only $9.99!

Click HERE for the Digital mp3 Download version of the 12 track album, complete with full digital book and album artwork.

We know you’ll enjoy the album and guarantee it’s the best you’ll hear in 2008! We’d love to hear all comments and if you have any questions, we’ll be happy to answer.

Just to prove that Chris isn’t the only one that listens to Bob Dylan, I give you one of my favorites of his, “To Be Alone With You” from “Nashville Skyline”.

I did this song originally on my “That’s All Folks” album, but couldn’t keep on the version I sold because of royalties.

I hope you enjoy my Laptop Session version! Coming up next week is my Original Wednesday, and I’ve already got my next two planned out. Make sure to check back every day!